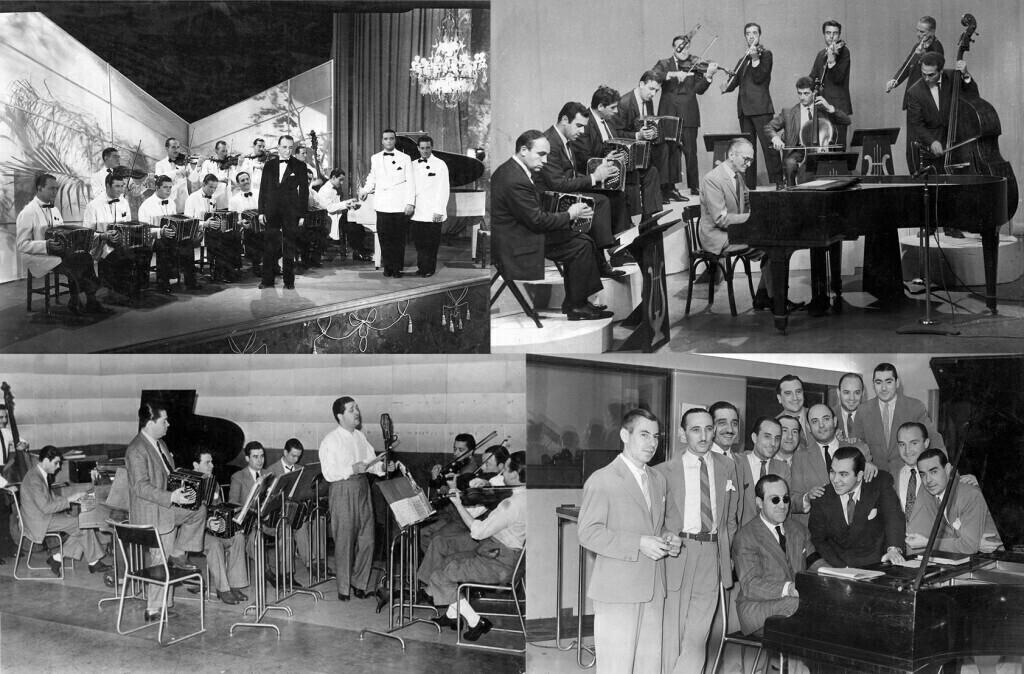 price is for whole compilation | price with VAT 0%

With this publication we want to introduce you to the so-called Big 4 in Tango: Osvaldo Pugliese, Juan D’Arienzo, Aníbal Troilo and Carlos Di Sarli.

All of them had their own style. All played for decades with different orchestra members and changed or better refined their respective way of playing tango.

Most of the songs are from the so-called golden age, which lasted from the 1930s to the 1950s.

El rey del compás, the king of the beat

He was the rock star, the way he played and understood tango excited everyone, especially the dancers. Roaring bandoneons, constant bass and fast pace. In 1935, when tango had been around for more than 40 years, D’Arienzo revolutionized the tango world. The 114 recordings that were made between 1935 and 1939 were style-defining for all upcoming orchestra conductors.

Everyone from now on focused on the dancers, accelerated the pace and some became superstars with millions in shellac sales (shellac was the forerunner of the record). So does Juan D’Arienzo.

He started with a sextet in the late 1920s. After a creative break in the 1930s, he began in 1939 with his “Orquesta Típica”, the 17 year old singer Roberto Rufino at his side. He followed the trend that D’Arienzo had set, but Di Sarli’s music was softer from the start, if no less stirring. Very soon he found his own unmistakable style, the violins that set the beat and, above all, the piano playing by the master himself.

For many Argentines, Troilo is tango. D’Arienzo and Di Sarli were very dominant in their orchestras, Troilo was gentler, more generous. It is no coincidence that many members of Troilo's orchestras later led successful orchestras themselves and created important compositions. Astor Piazzolla is a former bandoneon player in Troilo's orchestra.

What was his importance? Well, in addition to his way of playing bandoneon, letting his orchestra breathe (musically and personally), above all one thing: the role of the singer.

And he had someone whom many consider to be the best tango singer of all time (Carlos Gardel is always excluded from such rankings because he has saint status): Francisco Fiorentino, short name: Fiore

Fiorentino-Troilo probably stands for the pair of singers and orchestra in Tango Argentino, closely followed by Di Sarli-Podestá or D’Arienzo- Echagüe.

He began recording in the studio in 1943. Pugliese's music is rich in contrasts, accompanied by numerous tempo changes and always very emotional. Even beginners will recognize a Pugliese after a short time. Pugliese was an avowed communist, a few times in prison, but always remained humane and balanced. His most important orchestra members stayed with him for decades. One should have heard the name Osvaldo Ruggiero, his 1st bandeonist.

The way Pugliese orchestrated is unique, the notes were the same - but how they were played! In one piece, Pugliese lets us experience all the ups and downs, the gentlest melodies, which are replaced by the strongest bandoneon tones, which then disappear again like storm clouds and let the sun out.